$1B Aggregated Investments and Counting!

It’s official: Wealthica has surpassed 1 billion dollars in aggregated investments and assets. The team is delighted to have met such milestone by year end. Last month coincided with a period of robust growth as 300+ new members were added. So… how did we achieve this?

Where do we go from here?

The team has an ambitious goal for the next two years: 10 billion dollars in aggregated investments and assets. You heard that right.

Some of the enhancements we are considering include:

Mobile apps in the works

Since you have been reading until now, here’s a gift for you: a preview of our new mobile app coming soon to Android and iOS. 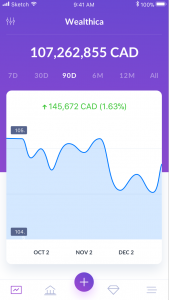 We thank you all for your continued support.

Update on Synchronization Delays Interview With Bill and Chris Bruner, Founders of Stockchase