I recently sat down with Dario Kachel, CEO and Founder at CoinTracking, and Wealthica’s CEO Simon Boulet. Munich, Germany-based CoinTracking recently partnered with Wealthica; it is a platform that analyzes all your cryptocurrency transactions and generates in real-time a vast amount of useful insights such as the profit / loss of your trades, the value of your coins, balances, realized and unrealized gains and reports for tax declarations. The team at CoinTracking has made it possible for Wealthica users to use the CoinTracking API for free after connecting their Wealthica account.

Phil Siarri: Hi Dario and Simon. Thanks for taking the time to partake in this interview. Dario, can you tell me a bit about your professional background and how CoinTracking came to be?

Dario Kachel: I started trading with my own first bitcoins in 2013 at Mt. Gox along others. After several trades I realized quickly that properly tracking all my trades is almost impossible. So I started off with an Excel spreadsheet like many others but I quickly grew tired of manually updating it. I met several traders at that time who had similar problems. So I realized that the need for a professional cryptocurrency portfolio tracking tool is huge and started developing CoinTracking, which initially launched in April of 2013.

Dario Kachel: Initially Simon has reached out to us. We were thrilled by the idea that Wealthica users can check their cryptocurrency holdings which they have stored in CoinTracking. Working with Wealthica team was a great experience. We share common goals and compete in different markets. 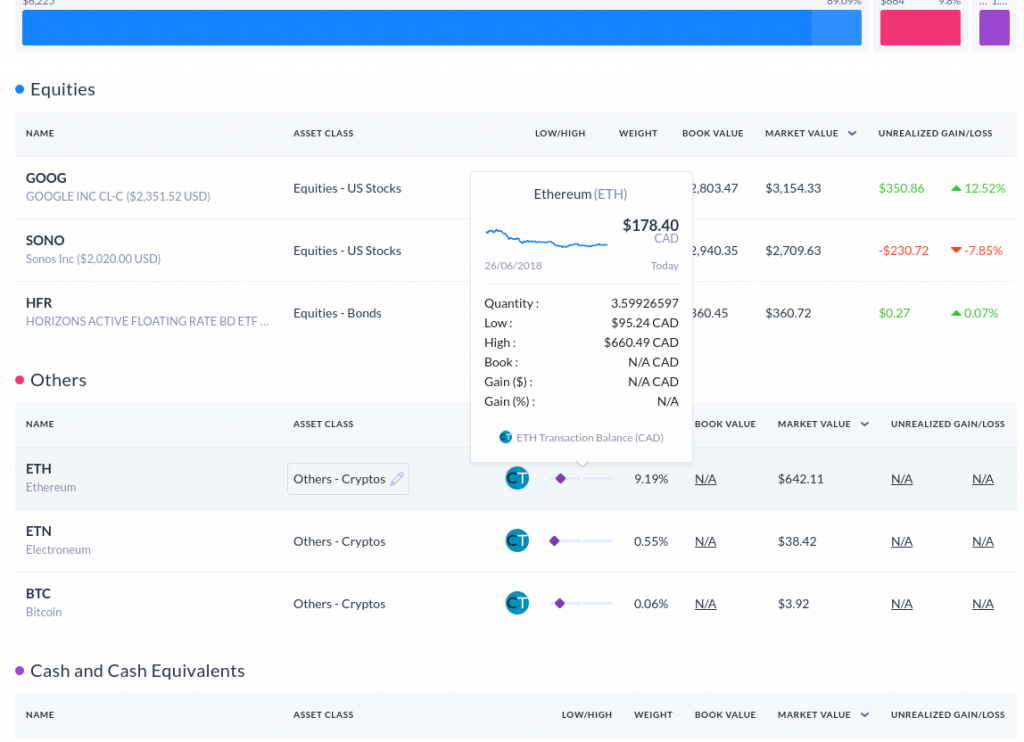 Simon Boulet: Wealthica added support for Bitcoin assets and tracking the Bitcoin price in February 2017. Since then we got constant requests for better cryptocurrency integration and automatic import from crypto exchanges and other wallets. The natural thing for us to do as an aggregator was to look at integrating directly with the APIs from the most popular exchanges. But we quickly realized this would be unsustainable due to the large number of exchanges and the rising number of coins to support. We turned to CoinTracking, which has support for automatically importing data from all the most popular exchanges, and also tracking the price for more than 6,000 different cryptocurrencies. The integration is also doing the hard work of tracking the CAD value of each crypto transaction for the purpose of proper tax reporting. Working with the CoinTracking team was great. They’ve also made their API available for free to Wealthica users. A paid subscription is needed if you want to import transactions in Wealthica.

Phil Siarri: What is your view on cryptocurrencies as a complementary asset to more traditional investments from a wealth management perspective?

Dario Kachel: Cryptocurrencies are more than a fashion trend. They will remain on the market, overcome upcoming challenges  and continue to develop. Cryptocurrency does not correlate to any existing asset class, which makes it an attractive part of investment portfolios.
The potential for growth is tremendous. In 10 years anybody will regret not being invested in it at first place. However, many people looking for the fast buck have burned their fingers. Investing small amounts of money over a long period to balance out market shifts is probably the best strategy.

Phil Siarri: Last but not least: there has been a lot of developments in the crypto world lately. How do you see the cryptocurrency market evolve in the next few years?

Dario Kachel: “A few years” is a long period in the fast evolving cryptocurrency environment. Everything is possible. Currently we are seeing the market in a recovery phase and stabilizing the heavy shifts in 2018. This type of market development in typical in the crypto market. Just like in the past, prices will pick up again. Our bet is that Bitcoin prices will reach 10,000 USD by the end of this year. Thereafter we will soon reach the old highs from 2017 and exceed them.. After institutional investors enter the market, $50,000 USD is the next target.

Phil Siarri: Thanks again for your time Dario and Simon, this is much appreciated.

Install the free add-on and connect your CoinTracking account to Wealthica.

Good to note: the Wealthica / CoinTracking integration does the hard work of tracking the CAD value of each crypto transactions for proper tax reporting.

Announcing support for the new Wealthsimple API! New Realized Gains Reports and the Power of Adjusted Cost Base (ACB)